Toward the end of last week, we had roast, carrots and potatoes for dinner. At the end of the meal when I was putting the food away I realized that the roast leftover was not going to be enough to make another big meal for the seven of us so I was a little stuck on what to do with it. Taking the time to reheat roast as is causes it to dry out and making veggie beef stew wasn't an option either because it isn't a favorite with the family.  I didn't want to shred it for tacos either.
So I started thinking about what to do with it, and then remembered that I had on my freezer spring cleaning list another small roast(1.83lbs) that I had picked up on a meat markdown rack that I hadn't found a use for either.  The light bulb went on and another pantry/leftover makeover meal was created!  Here is what I created... 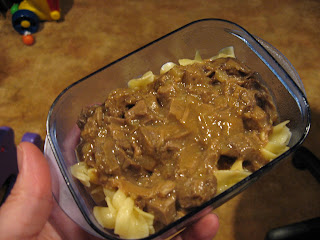 I cooked up the little roast in a skillet on the stove with a little water. Once it was done cooking, I diced up the roast and removed the fat.   I then diced up the leftover roast and added it to the roast I just cooked in my skillet on the stove.
I added enough water to cover the meat in the skillet.  I then added minced onions, worchestershire sauce, garlic powder, black pepper, beef bouillon cubes and seasoned salt.  I brought the meat mixture to a boil and then added in flour/cornstarch/milk mixture to thicken to a gravy consistency.  Brought the mixture back to a boil and then let simmer with a lid on the skillet while I cooked the noodles and the green beans to compliment the meat.
I served the meat over egg noodles and served the green beans on the side. It was a delicious meal!  My hubby even commented that he loved the flavorful meat gravy! He asked me what I did differently...the only thing I did differently from other times that I have done this dish is I made the gravy from scratch using bouillon and water rather than using a can of beef broth!
Here is the recipe:
1 1/2- 2lbs beef roast, cooked & diced
4 cups water*
3-4 tsp. dry minced onions*
2-3 tsp. worchestershire sauce*(used for coloring purposes rather than flavoring)
1 tsp. garlic powder*
1 tsp. seasoned salt*
4 beef bouillon cubes
Combine altogether. Bring to a boil.
In a separate cup, mix together 3 heaping spoonfuls of flour, 2 heaping spoonfuls of cornstarch. Add in enough milk to make a thick pourable paste.  Once mixture doesn't have any lumps pour into the meat slowly(Might not use all the of the flour/cornstarch paste!!). Stir meat while pouring the flour/cornstarch paste in to the skillet. Use just enough of the paste to thicken the meat.
Serve over egg noodles that are cooked al dente.
*the amounts are approximate!
This post is linked at:

Written by Sonshine at 9:14 PM

Sherry @ Lamp Unto My Feet said...

That sounds delicious, easy, and something you can prepare completely from your food storage! I'm big into personal preparedness and love trying new recipes like this. Here's a couple "pantry meals" your family may enjoy! http://tinyurl.com/c9eta7 and http://tinyurl.com/cb3d6y

I love this recipe. Beef and noodles and from leftovers. Yea!

Sonshine
born, raised, and live in the Midwest. I am a child of the King! Happily married to a very dear man for 24 years! Teacher turn SAHM turn Homeschool Mom. Now 22 years later, I am a Title 1 Intervention Paraprofessional for a local charter school. I have 4 boys(23, 21, 19, 13) and 1 girl(16).